You are here: Home / BLOG BOOTH

Every so often, the night sky puts on a show so spectacular that even the most unobservant (or busy) person can’t help but notice. This summer, we’re treated to just such a marvel: the team-up of heaven’s two brightest planets, Venus and Jupiter.

Look westward now after sunset; they are the first objects to appear. When the crescent Moon highlights them, they can’t be ignored! Check out these magnificent photos from June 19-20. This trio will dazzle us one more time July 17-18, though not as brilliantly since they will be much closer to the horizon and set shortly after the sky darkens.

Besides being beautiful to behold, what does this celestial alignment tell us? Planetary interactions signal the time for various influences to combine. And Venus and Jupiter bring us a few of our favorite things: love, luck and fortune.

Venus is the classical planet of attraction, romance, harmony, equality, peace and all we deem valuable (including possessions and money). Jupiter, the biggest planet, is expansive and fosters growth and progress. It relates to law, morals, philosophy and religion, higher education, travel and everything international.

Ancient astrologers called these two the “prime benefics,” which translates as the most important doers of good. Their blend should bring lots of benefits, possibly “too much of a good thing” and over-indulgence. Under their dual influence, people might be more open-minded, open-hearted and generous. Bosses might be more apt to grant a raise, bonus or promotion. We could expect markets and incomes  (and spending) to rise. That said, prepare yourself for a mitigating influence to rear its head in early August. (More on that closer to the time.)

Venus and Jupiter are within the potent range of 5 degrees near one another June 22 to August 11 and again October 19 – 31. Mid-August, the Sun gets too close to them for us to see them. By the end of August, they are visible again but in the morning sky.

Such a Sight is Rare!

Jupiter moves through a sign in about a year while Venus can circle the whole zodiac in less than a year. It passes Jupiter once in a year, usually quite quickly. An extended visit only occurs when Venus hangs around in the same part of the zodiac for a few months as a result of a zigzag optical illusion called retrograde motion. (A lot of people have heard of Mercury retrograde but don’t realize all the planets, including Venus, have retrograde cycles.) Although Venus is retrograde about every year-and-a-half, it doesn’t often back up where Jupiter is traveling at the time. In the summer of 2015, as Venus moves forward, retreats and then proceeds forward again, it passes Jupiter three times, which we call a triple conjunction.

The first of their three meetings (July 1) occurs not far from Regulus, the brightest star in the constellation of Leo, called the “heart of the Lion.” I remember a planetarium program in Chapel Hill, NC in late 2000 speculating about the “Star of David,” which the Three Wise Men (astrologers, of course) followed to find Jesus. The theory was a convergence of these three bright objects.

The last time Venus and Jupiter had a comparable triple-conjunction was in 1995. We won’t see a multi-month union of these two again for 21 years. So get out there these nice warm nights and wish on the two evening stars as they team up!

For details about the dates and degrees of the triple conjunctions and other connections Venus makes three times in this retrograde cycle, see the article in the Study Booth’s Advanced Topics.

Working with the Energies

Retrogrades are always a time for review. When it’s Venus that’s retrograde, our inspection should concern what’s most important to us. As it shifts from direct motion to backtrack, Venus is closest to earth, passing between earth and the Sun, both of which represent the individual Self. This suggests a Venus retrograde cycle is a period to love and appreciate ourselves more. Although Venus inclines us to be other-oriented (as the planet of partnership and teamwork), now is a time to put personal interests on the front burner and go after our heart’s desires. Most of the zigzag takes place in Leo, which is associated with the heart as well as creativity, joy, arts and entertainment, children (including your Inner Child) and fun! Jupiter has been in Leo since July of 2014, magnifying all of these tendencies.

How Will YOU Be Affected?

The answer depends on your chart, not just “your sign” (Sun sign). These planetary combinations do not affect only people whose Sun signs are those mentioned above. There is a section in everyone’s horoscope chart that contains the signs of Leo and Virgo, where this retrograde occurs. Certain circumstances correspond with the various regions of a chart (called houses). If you have your chart, find which houses have these signs and they will show the areas of your life that will be impacted. A reading can also cover potential ways to work with the energies at hand. In a future blog very soon, I promise to outline sign by sign the effects according to the houses.

If you enjoy this blog, you will find similar discussions of celestial phenomena in Janet’s Plan-its astrology calendars. 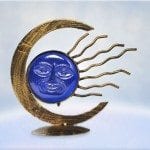 The earth rotates on its axis a full 360 degrees in twenty-four hours. If you face east at night when the light of Sun doesn’t block your view, you can watch the parade of zodiac constellations slowly coming up over the horizon. Each takes about two hours (24 divided by 12 = 2) to rise. The sign that was rising at your birth is your rising sign. It starts the beginning of your chart and the planet which rules that sign (is most strongly associated with it) is said to rule your whole chart.

Each portion of a chart, like a slice of the heavenly pie, is called a house and corresponds with a department of your life. The first slice (just below the eastern horizon) relates to very personal matters such as your genetics, body, appearance, outlook and key personality traits. You will know yourself much better by learning about your rising sign. You can get a lot of helpful hints about your health by following what’s going on with your first house and your ruling planet.

If you like to read horoscope forecasts for the zodiac signs, you’re familiar with looking at your Sun sign. That’s the sign for the time of year you were born. You share it with everyone born during that Sun sign period (which you have noticed does not correspond to an exact calendar month). To read a forecast that applies more personally to you, check according to your rising sign. When astrologers write forecasts, they look where the moving planets (called transits) are travelling and interpret them according to the meanings of the house departments. Your life will be better described by matching up with your real house departments, and unless you are born around sunrise, your Sun sign will not be rising. Therefore your Sun sign forecast does not describe your department conditions as accurately as the forecast for your rising sign would.

Your true “horoscope” (meaning a “look at the hour”) is based on your exact time of birth, as well as the date (of course!) and the place. Those are the three components used to construct a chart and that process identifies the sign that was rising in the east at your birth. Look for your birth time on your birth certificate or in a baby book. That’s better than relying on the memory of one of your relatives (although they may have a story that helps in case the birth certificate or baby book does not have your birth time). You can also try contacting the Vital Statistics or Records department at the town or city hall in your birth place (not the hospital, which turns birth and death records over to the municipality). The doctor had to file a “Record of Live Birth” (since you were not stillborn) and that almost always has the birth time. Even if your birth certificate does not state the time of birth (look at it carefully – the time does not always stand out), there’s a good chance it will be in your file. Don’t just request a birth certificate; make it clear that you want the time. You may be asked to send a self-addressed stamped envelope and a payment to find out but it’s worth the cost and effort.

Once you have the time, go to a website that offers free chart calculations, such as alabe.com and fill in your information. When the chart circle appears, your rising sign is shown at what would be the 9 o’clock position on a clock face (the middle of the left side). It will be the dividing line between the 1st and 12th houses. (Houses go counterclockwise around the circle, starting at this eastern horizon.)

If you absolutely have no way to find out your birth time, there is one last resort: rectification. That’s a lengthy and grueling process where an examination of what was happening astrologically at the times of major events in your life thus far points to a likely birth time and a workable chart for you. Many astrologers won’t undertake such a task but yours truly will, for a price, a high price. Which is a good incentive for you to go to great lengths first to find out your birth time if that’s at all possible.

Without a birth time, an astrologer is limited in the detail she can provide to you. Your birth time is a key to unlock the treasure chest of information about your life that lies in your true horoscope.